PG-13for some suggestive material and smoking.

Do the Right Thing

Eternal Sunshine of the Spotless Mind 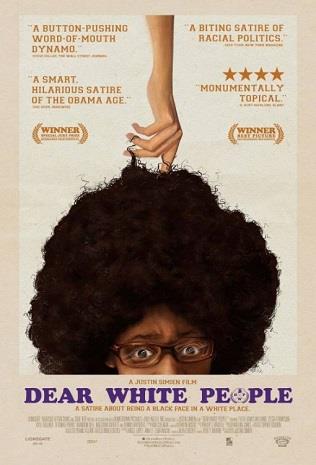 RRated R for language, sexual content and drug use.

A young man and woman meet on a train in Europe, and wind up spending one evening together in Vienna. Unfortunately, both know that this will probably be their only night together

RRated R for language, sexual content and drug use.

A satire that follows the stories of four black students at an Ivy League college where a riot breaks out over a popular African American-themed party thrown by white students. With tongue planted firmly in cheek, the film explores racial identity in post-racial America while weaving a universal story of forging one's unique path in the world.

Do the Right Thing

On the hottest day of the year on a street in the Bedford-Stuyvesant section of Brooklyn, everyone's hate and bigotry smolders and builds until it explodes into violence.

Eternal Sunshine of the Spotless Mind

When their relationship turns sour, a young couple undergoes a medical procedure to have each other erased from their memories.

Viggo Mortensen (Eastern Promises, The Lord of the Rings trilogy) and Academy Award® winner Mahershala Ali (Moonlight, Hidden Figures) star in Participant and DreamWorks Pictures’ Green Book. Peter Farrelly (There’s Something about Mary, Fever Pitch) directs the warmhearted and surprisingly comic road-trip adventure based on a true friendship that transcended race, class and the 1962 Mason-Dixon line. When Tony Lip (Mortensen), an Italian-American bouncer with a seventh-grade education, is hired to drive Dr. Don Shirley (Ali), a world-class African-American pianist on a concert tour from Manhattan to the Deep South, they must rely on the “Negro Motorist Green Book” to guide them to the few establishments that were then safe for Blacks. Confronted with racism, danger—as well as unexpected humanity and humor—they are forced to set aside differences to survive and thrive on the journey of a lifetime. Jim Burke (The Descendants), Charles B. Wessler (The Heartbreak Kid) and Farrelly produce alongside Farrelly’s fellow writers, Nick Vallelonga and Brian Currie. The drama is executive produced by Participant’s Jeff Skoll (The Help) and Jonathan King (Lincoln), along with Cinetic Media’s John Sloss (Boyhood) and Steve Farneth, as well as Kwame Parker (Kill Bill series) and Octavia Spencer (Fruitvale Station). Linda Cardellini (Brokeback Mountain, The Founder) co-stars.

PG-13for some suggestive material and smoking.

Set in 1952 London, the film will follow Williams, a veteran civil servant, who has become a small cog in the bureaucracy of rebuilding post-WWII England. As endless paperwork piles up on his desk, he learns he has a fatal illness. Thus begins his quest to find some meaning to his seemingly grey, monotonous life before it slips away. He first attempts, with limited success, to throw himself into debauchery during a wild night in Brighton in the company of a bohemian writer he befriends there. Then, arriving back in London, he ignores family and work responsibilities for days on end. But soon he becomes intrigued by Margaret, a young co-worker in his office, who appears to exemplify exactly what life and living is – and what may so far have passed him by. As their friendship grows, she – inadvertently – shows him a way to face down his mortality; how to harness his years of experience and dedication into a final supreme effort to push through, against all odds, a modest, much-delayed project for children in a poor district of East London.

Fathom Events and Paramount Pictures are bringing Pretty in Pink to select cinemas nationwide for a special limited engagement, which includes a featurette about bringing the film to the big screen. Teen sensations Molly Ringwald (Sixteen Candles, The Breakfast Club) and Andrew McCarthy (St. Elmo’s Fire) drew rave reviews for their starring performances in this hit love story produced and written by John Hughes (Ferris Bueller’s Day Off, Planes, Trains, and Automobiles). Andie is a high school girl from the other side of town. Blane’s the wealthy heartthrob who asks her to the prom. But as fast as their romance builds, it’s threatened by the painful reality of peer pressure. From its bittersweet story to its hip New Wave soundtrack, the film features great supporting performances from Harry Dean Stanton, Jon Cryer, James Spader and Annie Potts.

Socially frustrated Barry Egan calls a phone-sex line to curb his loneliness. Little does he know it will land him in deep trouble and will jeopardize his burgeoning romance with the mysterious Lena.

A drama based on the life of college football hero Ernie Davis, the first African-American to win the Heisman Trophy.

ATTENTION Beginning Sept. 8, the Count Basie Center for the Arts will require patrons to present one of the following to attend events at Hackensack Meridian Health Theatre, The Vogel or Basie Center Cinemas: Proof of full vaccination A negative COVID-19 test taken within 72 hours of door time Patrons aged 12 and under are not required to present test results, but must remain masked during all events. A newly engaged couple have a breakdown in an isolated area and must pay a call to the bizarre residence of Dr. Frank-N-Furter.

From Darren Aronofsky comes The Whale, the story of a reclusive English teacher living with severe obesity who attempts to reconnect with his estranged teenage daughter for one last chance at redemption. Starring Brendan Fraser and based on the acclaimed play by Samuel D. Hunter.

An adaptation of "The Wizard of Oz" that tries to capture the essence of the African-American experience.