KWAHS: This Property is Condemed

Southern circuit: You Gave Me a Song: The Life and 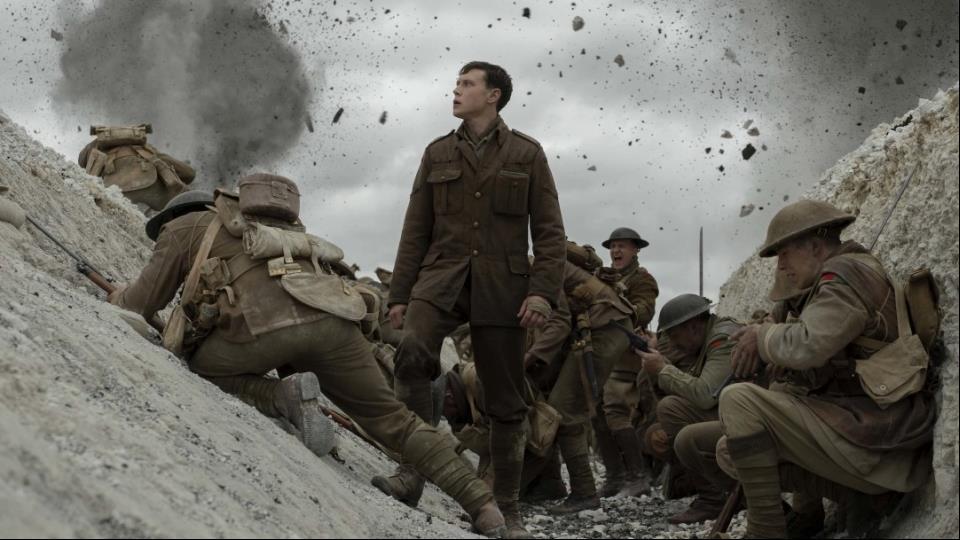 At the height of the First World War, two young British soldiers, Schofield (Captain Fantastic’s George MacKay) and Blake (Game of Thrones’ Dean-Charles Chapman) are given a seemingly impossible mission. In a race against time, they must cross enemy territory and deliver a message that will stop a deadly attack on hundreds of soldiers—Blake’s own brother among them

CUNNINGHAM traces Merce’s artistic evolution over three decades of risk and discovery (1944–1972), from his early years as a struggling dancer in postwar New York to his emergence as one of the world’s most visionary choreographers. The 3D technology weaves together Merce's philosophies and stories, creating a visceral journey into his innovative work. A breathtaking explosion of dance, music, and never-before-seen archival material, CUNNINGHAM is a timely tribute to one of the world’s greatest modern dance artists.

Barely escaping an avalanche during a family ski vacation in the Alps, a married couple is thrown into disarray as they are forced to reevaluate their lives and how they feel about each other. Julia Louis-Dreyfus and Will Ferrell star in this biting comedy.

ALL TICKET REVENUE BENEFITS TAKE STOCK IN CHILDREN in celebration of its 20th anniversary in the Florida Keys.

Four years ago, Gene gave a fascinating and timely talk on the 2016 election. Fresh from the initial caucuses and primary elections, Gene will be setting the scene for the 2020 election.

Well known to MSNBC viewers, Gene is a newspaper columnist and an associate editor of The Washington Post. His columns are syndicated to 262 newspapers. He won a Pulitzer Prize in 2009, and was elected to the Pulitzer Prize Board in 2011 and served as its chair from 2017 to 2018.

VIP ticket holders are invited to join Gene and Avis Robinson at Halo at the Saint Hotel for canapes and cash bar after his lecture and discussions at the Tropic.

Imagine an organism that feeds you, heals you, reveals secrets of the universe and could help save the planet. Fantastic Fungi is a revelatory time-lapse journey, from 2019 Maui Film Festival Visionary Award honoree and director Louie Schwartzberg, about the magical, mysterious and medicinal world of fungi and their power to heal, sustain and contribute to the regeneration of life on Earth that began 3.5 billion years ago. Better yet, you'll see it through the eyes of mycologists, like renowned Paul Stamets exing about the unlimited potential of fungi in the fields of food, medicine, expanding consciousness, bioremediation, neurogenesis and treating end-of-life anxiety. And that's just the tip of the iceberg.

“Gaslight” opens the inaugural season for the Key West NOW Women’s Film Festival. An extraordinary 1944 psychological thriller starring Ingrid Bergman and Charles Boyer, this film will answer the question, “Where did the term ‘to gaslight’ originate?”

One of the most memorable romantic films ever and winner* of two Academy Awards®, Sam (Patrick Swayze), living as a ghost, discovers his death wasn’t just a random robbery gone bad. To help him reconnect with the love of his life, Molly (Demi Moore), and solve his own murder, he enlists the talents of a skeptical psychic (Oscar®-winner Whoopi Goldberg), who doesn’t even believe her own abilities. Ghost is a supernatural mystery-thriller that will cross over into your heart and never leave. Ghost will surprise you, delight you, make you believe. Celebrate the 30th anniversary of this timeless romantic classic at a special event that includes exclusive insights from Turner Classic Movies.

As Baby Doll’s 20th birthday approaches, crafty Sicilian Eli Wallach enters the picture (making his film debut, along with fellow supporting actor Rip Torn). He covets both Malden’s wife and business, and he’s willing to go to great lengths to get what he wants.

Brick, an alcoholic ex-football player, drinks his days away and resists the affections of his wife, Maggie. His reunion with his father, Big Daddy, who is dying of cancer, jogs a host of memories and revelations for both father and son.

An Italian-American neighborhood in Louisiana is disturbed when truck driver Rosario Delle Rose is killed by police while smuggling. His buxom widow Serafina miscarries, then over a period of years draws more and more into herself, trying to force her lovely teenaged daughter Rosa to do likewise. On one eventful day, Rose finally breaks away; Serafina learns of Rosario's affair with another woman; and a new carefree, handsome Italian truck driver enters her life...

KWAHS: This Property is Condemed

Repressed desires, sultry women, sweltering weather and a handsome new stranger in town: this is Williams at his very best. Depression-era Dodson, Mississippi, is particularly devastated with the arrival of Owen Legate (Robert Redford), a railroad official with a pocketful of pink slips for the rail yard employees. Natalie Wood is captivating as Alva Starr, the coquettish town flirt with plenty of big plans but nowhere to go … until Legate appears on her doorstep. Their ensuing affair enrages Alva’s distant, uncaring mother (Kate Reid)—and ignites a town’s revenge.

In Mexico City's wealthiest neighborhoods, the Ochoa family runs a private ambulance, competing with other for-profit EMTs for patients in need of urgent help.

Liam Scarlett’s glorious production of Swan Lake, new in 2018, returns for its first revival. While remaining faithful to the Marius Petipa/Lev Ivanov text, Scarlett’s additional choreography and John Macfarlane’s magnificent designs breathe new life into what is arguably the best-known and most-loved classical ballet. The entire Company shines in this eternal tale of doomed love, a masterpiece filled with iconic moments. Tchaikovsky’s first score for ballet soars with its symphonic sweep and combines perfectly with exquisite choreography from the grand pas de deux of Prince Siegfried and Odile to the swans at the lakeside. An intoxicating mix of spectacle and intimate passion, the overall effect is irresistible.

Cathy Marston has previously been an Associate Artist of the Royal Opera House and Director of Bern Ballett, and is much in demand internationally. The inspiration for her first work for The Royal Ballet Main Stage is the momentous life and career of the cellist Jacqueline du Pré. Jerome Robbins’s elegant and elegiac classic forms the second part of the programme. This exercise in pure dance for five couples, set to music by Chopin, is a masterpiece of subtlety and invention.

Beethoven’s only opera is a masterpiece, an uplifting story of risk and triumph. In this new production, conducted by Antonio Pappano, Jonas Kaufmann plays the political prisoner Florestan, and Lise Davidsen his wife Leonore (disguised as ‘Fidelio’) who daringly sets out to rescue him. Set in strong counterpoint are the ingredients of domestic intrigue, determined love and the cruelty of an oppressive regime. The music is transcendent throughout and includes the famous Act I Quartet, the Prisoners’ Chorus and Florestan’s impassioned Act II cry in the darkness and vision of hope. Tobias Kratzer’s new staging brings together the dark reality of the French Revolutionary ‘Terror’ and our own time to illuminate Fidelio’s inspiring message of shared humanity.

Puccini’s music and Richard Jones’s production capture the joy and heartache of young love in Paris.

Journey with The Royal Ballet to an enchanted world of princesses, fairy godmothers and magical spells in this landmark production of Petipa’s classic ballet, to Tchaikovsky's glorious music.

Artist Bill Traylor was born into slavery in 1853 on a cotton plantation in rural Alabama and remained a farmer after the Civil War until the late 1920s. Aging and alone, he moved to Montgomery and worked odd jobs; a decade later, in his late 80s, Traylor became homeless and started to draw and paint, both memories from plantation days and scenes of a radically changing urban culture.

%:30 Champagne Reception and a Q&A following the reception with Director Jeffery Wolf

The rapid rise of emoji (Japanese for “picture character”) is a global phenomenon without precedent. Their widespread use and ability to convey complex messages have not only cemented emoji’s place as an emerging digital language but prompted difficult questions about the creation of a language and digital communication’s fraught ties to identity and inclusion. In “Picture Character,” directors Martha Shane and Ian Cheney lead viewers on a deep dive into the ever-evolving world of picture characters, from their humble beginnings in Japan to mobile keyboards the world over, and shed fresh light on the private consortium that approves new emoji offerings and the individuals fighting ✊ to make the language more representative of its billions of users.

Southern circuit: You Gave Me a Song: The Life and

The film follows the eighty-four-year-old Gerrard over several years, weaving together verité footage of living room rehearsals, recording sessions, songwriting, archival work and performances with photos and rare field recordings. Much of the film is told in Alice’s voice and via interviews with musical collaborators and family members, who share the story of Alice and others chasing that high lonesome sound.

From writer/director Guy Ritchie comes THE GENTLEMEN, a star-studded sophisticated action comedy. THE GENTLEMEN follows American expat Mickey Pearson (Matthew McConaughey) who built a highly profitable marijuana empire in London. When word gets out that he’s looking to cash out of the business forever it triggers plots, schemes, bribery and blackmail in an attempt to steal his domain out from under him

Say hello to Mrs. Robinson! The 1967 classic coming-of-age comedy has been restored and is returning to the big screen for two days only. Grab your cap and gown and head to your local cinema for this special 50th Anniversary event!